I was imaging Jupiter Saturday evening and could tell during the video capture that the seeing was better than what I had seen lately. There was a feature on the disk which while I didn’t know what it was, it was persistent and I could also see the moons Io and Europa which meant the focus was holding well.  When I processed the first series, which was actually the last since I started at that end, I was wowed to see that I had captures the shadow of Io on Jupiter.  Woot!  So, that is Io in the upper left and Europa in the lower right. Setup was an 8” Celestron SCT on an ASGT mount with an ASI120MC camera.  Best 25% of 2000 10ms frames.  Reducing the image size to 320×240 pixels allowed the capture of about 200 frames per second. 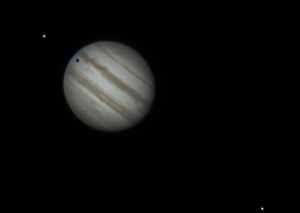 It was almost exactly a month since my last chance to take a picture of Jupiter.  The seeing was better but I’m not so sure of the result. 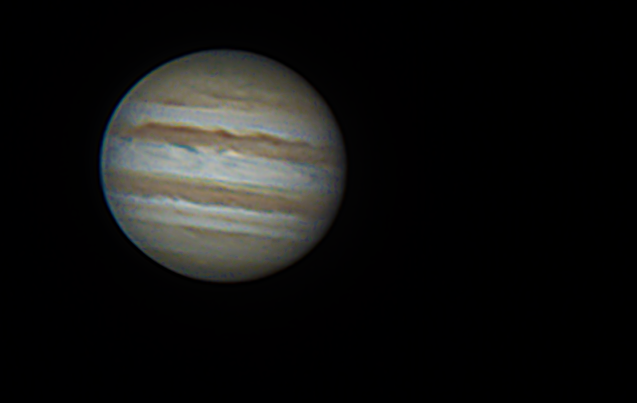 The seeing wasn’t great, which is an understatement, but I managed to get this.  7ms exposure, best 20% of 4000 frames stacked. Sharpening in Photoshop. I could tell from the start that my focus was good, sometimes it is hard to be sure, and the seeing would settle down between bouts of 20 mph wind. This front was coming in. I tried series of 3ms and 1ms videos but while sharper they were too grainy from having to pump up the gain. Maybe I’ll be able to shoot all 7 planets this year. 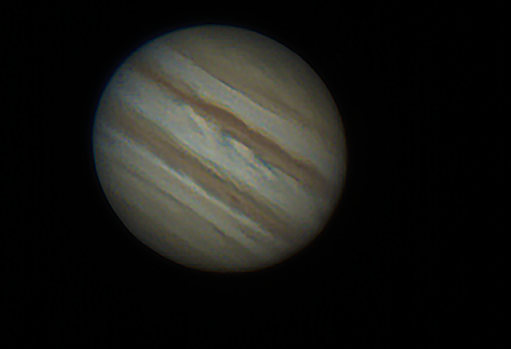