Here are two images from Saturday night at the River Ridge Observatory. Both were shot with a monochrome camera using red, green, and blue filters and a 9.25″ SCT. Each color was picked from the best 50% of about 3000 frames (30 seconds of video). Stacked then aligned and combined in Photoshop. Jupiter was shot with 10 millisecond exposures while Saturn required 50 millisecond. Saturn was barely above the trees and I should have waited but frankly it is near the southern limit of its journey around the Sun and doesn’t get too high. Jupiter was just past the meridian. I may work with it some more when I have time, the raw footage looked like it would be better than this. 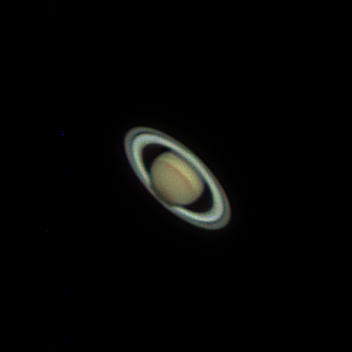 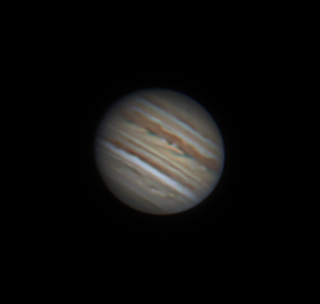 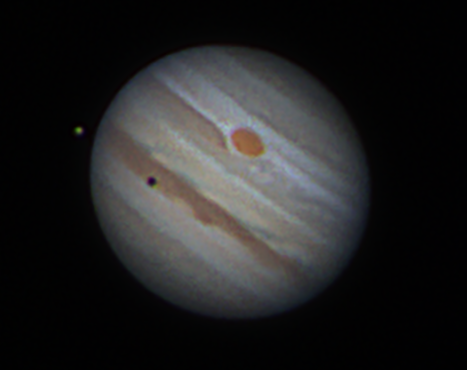 Friday night I went up to the River Ridge Observatory to shoot some planets. I started with Venus which is about as high in the sky after sunset as it will get in this apparition. It was disappointing so I moved on. Next up was Jupiter. I’m using a monochrome camera with RGB filters so here we have the combined result with the red, green and blue images that went into it. The color image is softer than I’d like but shows Io and it’s shadow that were transiting the disk of Jupiter this evening, They were both near the meridian of Jupiter when I started and visible on the laptop. Below are the red, green, and blue filter monochrome images that went into the image above. Notice the red spot is barely visible in the first image which is the red channel and darkest in the last image which is the blue channel. 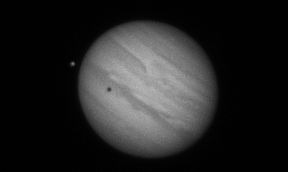 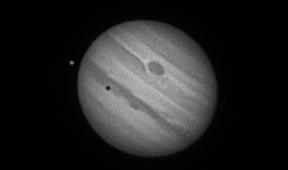 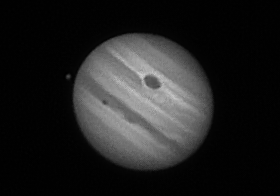 Here is a short (2 frame) video of a nearby star called “Barnard’s Star” in the constellation of Ophiuchus. After the famous Alpha Centauri triple star system, this is the closest star to the Solar System at 6 light years away. By a weird coincidence, just over one hundred years ago an astronomer named E.E. Barnard discovered that this star is moving across the sky faster than any other object in the sky beyond the Solar System. This “proper motion” is measured at 10 arcseconds per year. By comparison, the planet Jupiter appears to be about 40 arcseconds across from Earth. Not a lot but easily measurable with a telescope and camera. In these two images, take 26 months apart, we can see one star move to the left just a little.